The depletion of predators across the world’s ecosystems is one of humankind’s most pervasive influences on nature. In addition to triggering a cascade of effects across food webs, the reduction of predators can tip ecosystems into fundamentally different states, altering the processes and resources upon which humans depend.  Equally, with the recovery of previously exploited predators, tipping points can be breached and surprising shifts can ensue. My students I are studying these interactions and their context-dependent effects by examining predatory fish recovery in marine reserves, sea otter range expansion along British Columbia’s (BC) Central Coast, and the degree to which trophic cascades can cross ecosystem boundaries.

Check out what the lab was up to this past summer on the Central Coast of BC! 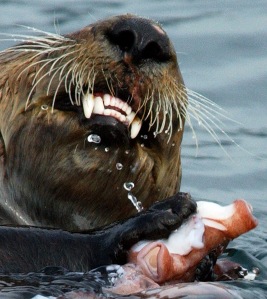 Specifically, these collaborative research projects ask: 1) To what extent does sea otter occupation time, the relative abundance of alternative prey and physical habitat drive the population structure of northern abalone, a culturally-important invertebrate currently listed as endangered under Canada’s Species-at-Risk Act? (PhD student Lynn Lee) 2) Based on historical records and archaeological faunal remains, what are appropriate baselines for abalone? 3) What is the rate of sea otter range expansion on BC’s Central Coast and how does sea otter diet diversity vary with occupation time? (Masters student Leah Honka) 4) What are the indirect effects of sea otter occupation time on temperate reef fish biomass, diversity and trophic level and is there evidence for thresholds among these relationships? (Masters student Josh Silberg) 5) Using prehistoric faunal remains and naturally occurring stable isotopes, how have sea otters influenced nearshore productivity trough deep time? 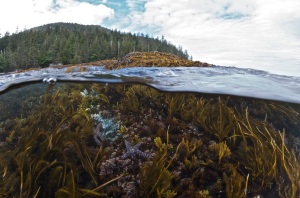 Emerging evidence reveals that the cascading effects of predator depletion and recovery can be highly context-dependent, varying as a function of biotic and abiotic interactions. Furthermore, novel consumers can trigger novel cascades, some of which have been shown to cross ecosystem boundaries. For example, invasive terrestrial rats can elicit far-reaching indirect effects on intertidal food webs, triggering trophic cascades and altering ecosystem productivity. On the islands of Haida Gwaii, at the interface between land and sea, we are investigating the direct and indirect effects of invasive rats on black oystercatchers, intertidal mollusc density and size, macroalgal biomass and the extent to which wave exposure mediates these cascading effects (Masters student Christine Gruman). This research is in collaboration with Gwaii Haanas National Park Reserve and Haida Heritage Site and the Night Birds Returning Project; SGin Xaana Sdiihltl’lxa.

Strong evidence from temperate reefs worldwide suggest that marine reserves can induce trophic cascades by facilitating the recovery of previously fished predators. The new Gwaii Haanas National Marine Conservation Area Reserve established in 2010 and current Rockfish Conservation Areas (RCAs) embedded within it represent an unprecedented manipulation of harvest effort by which to test the ecosystem effects of predator depletion and recovery at ecologically relevant scales. 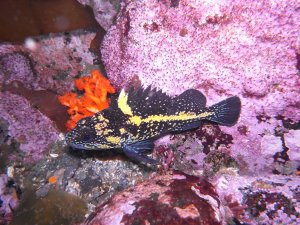 In collaboration with Parks Canada, Fisheries and Oceans Canada and Haida Fisheries, we have launched a strategic subtidal kelp forest monitoring program to gather baseline data by which to assess the ecological effects of future marine zoning policies on important fisheries (e.g., rockfish, sea urchin) and species-at-risk (e.g., quillback rockfish, northern abalone). We are also quantifying the effects of current RCAs on rock fish biomass and niche widths, and the role of kelp-derived organic carbon in fueling these coastal food webs (Undergrad student Angeleen Olson). Finally, we are combining visual surveys and stable isotope data on reef associated fish to evaluate the community-level relationships between fish body size, abundance and trophic position to develop theoretical baselines against which the ecosystem effects of fishing can be measured (PhD student Rowan Trebilco).

Increased appreciation of the coupling between ecosystems and human well-being has triggered a paradigm shift in the applied ecological sciences towards a focus on understanding the dynamics of coupled social-ecological systems (SES). In marine systems, current management approaches have demonstrably failed to halt or reverse fisheries declines, in part due to the inadequate recognition of the strong links between social and ecological processes. By studying prehistoric clam gardens, contemporary Pacific herring declines, and community-based marine use plans in BC, my students and I aim to gain insights into the complex dynamics of these linked systems of people and nature.

Coastal First Nations in British Columbia have relied on and managed marine resources for sustenance, and as means for spiritual, social, and economic well-being for millennia (Brown and Brown 2009, Trosper 2009). Recently, commercial interests in a coastal fishery for kelp (Macrocystis integrifolia) in British Columbia has spurred coastal First Nations to develop and implement their own community-based management plan that would be grounded in ecosystem-based science, their own ancestral resource management laws and employ local people such that the financial benefits would be retained locally. Kelp forests provide numerous ecosystem services to humans, including the provisioning of food and habitat for coastal fisheries and the uptake and storage of atmospheric carbon (Steneck et al. 2002, Krumhansl & Scheibling 2012, Wilmers et al. 2012). This collaborative project with the Heiltsuk Nation will conduct research to assess the trade-offs of kelp harvest for ecosystem services and resilience, and economic benefits for coastal First Nations. Specifically, this work addresses three main questions: 1. How does kelp harvest interact with climate change and other natural disturbances to affect the storage and flux of atmospheric carbon in kelp forests in British Columbia? 2. What are the impacts of kelp harvest to kelp forest ecosystem resilience? 3. How can kelp harvest be designed to maximize financial benefits and poverty alleviation in First Nations villages while minimizing the negative effects on coastal fisheries, and carbon flux and the storage capacity of kelp forests?

Sustaining global food production presents one of the greatest environmental challenges of the 21st century. Given current global population and consumption trajectories, the world’s food production must double by 2040 while its footprint must shrink substantially to reduce the degradation of land, water, biodiversity and our global climate. Prehistoric clam gardens, human-made intertidal rock-walled terraces, may offer some solutions to this contemporary conservation challenge.  By integrating experimental field ecology, stable isotope analysis, archaeology and traditional knowledge, we are investigating the extent to which this ancient form of mariculture increased clam productivity (Masters student Amy Groesbeck). Broadly, the results of this work will inform issues surrounding local food security, food sovereignty, First Nations access rights and adjacency. 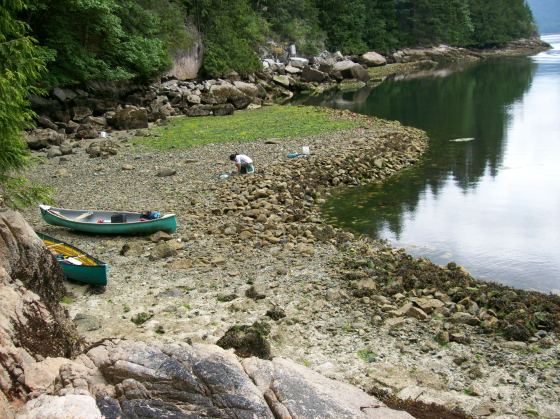 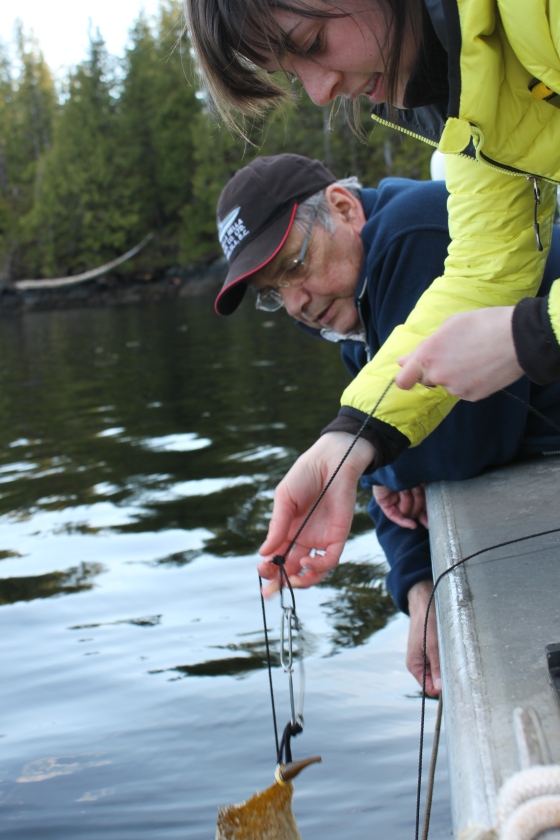 Forage fish play a fundamental role in temperate marine ecosystems as conduits of energy from low to upper trophic levels. As prey to a diversity of piscivorous fish, sea birds and marine mammals, the exploitation of forage fish can have extensive ecosystem and economic impacts.  Pacific herring (Clupea pallasi) are a low trophic-level forage fish that have long played a critical ecological, social and economic role in British Columbia given the traditional First Nations roe-on-kelp fishery and hemlock and commercial roe and bait fishery. Despite management initiatives however, herring populations have exhibited declining trends over the last decade. In collaboration with the Heiltsuk Integrated Resource Management Department, Gladstone Reconciliation Team, and natural and social scientists from SFU, UBC and University of Washington, we are investigating the ecological and socio-cultural causes and consequences of Pacific herring declines along the Central Coast of BC.

As one part of this large interdisciplinary team, we have co-designed and implemented three specific natural science projects with our First Nations partners. To reduce our uncertainty in population estimates of Pacific herring, we are quantifying the spatial variation in herring egg loss rates and the mechanisms driving it with field surveys and a large-scale field experiment (Masters Student Britt Keeling). We are using stable isotopes and ecosystem models to measure the extent to which these pelagic forage fish subsidize coastal food webs (Postdoc Margot Hessing-Lewis). Lastly, we have documented temporal trends in the spatial extent of regional herring spawn events through time based on Heiltsuk traditional knowledge. 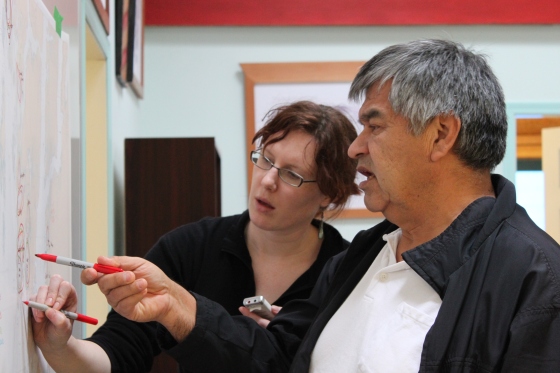 Mounting evidence from South America, Africa and Micronesia suggest that community-based collaborative marine use management can better deliver outcomes for people and the ecosystems they depend on. In collaboration with the Coast First Nations and researchers at UVic, we have begun researching the ecological, social and governance design principles upon which to formulate and evaluate community-based marine use plans here in British Columbia (PhD Student Jenn Burt). 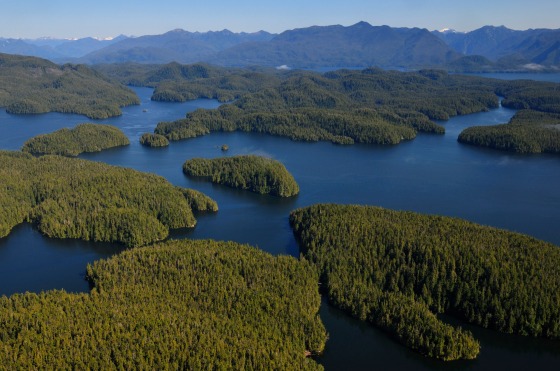